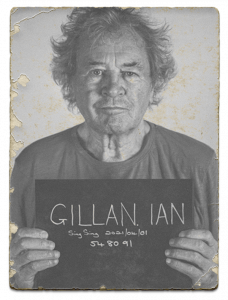 Ian joined Deep Purple from Episode Six in 1969. His first Purple album appearance was on ‘Concerto for Group and Orchestra’ but Gillan made his greatest vocal impact on ‘In Rock’, ‘Fireball’ and ‘Machine Head’. The band’s most famous anthem ‘Smoke On The Water’ emphasises his ability to deliver a lyric with smouldering intensity and rock’n’roll exuberance.

Gillan led his own band during the late Seventies before rejoining Deep Purple for ‘Perfect Strangers’ in 1984. In 1989 he toured as Garth Rockett before releasing further solo albums including ‘Naked Thunder’ (1990), ‘Toolbox’ (1991) and Dreamcatcher (1998).

Turning To Crime – Out Now